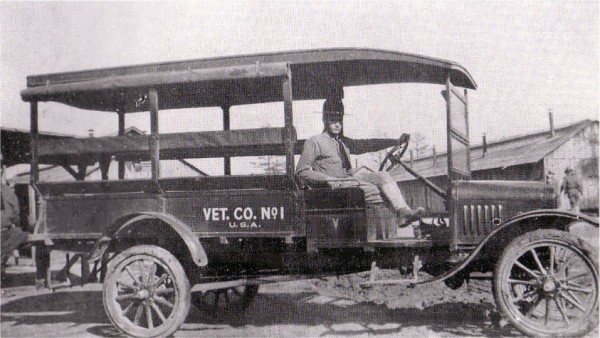 The U.S. Army Veterinary Corps was formally established by an Act of Congress on 3 June 1916. However, recognition of the need for veterinary expertise had been evolving since 1776 when General Washington directed that a “regiment of horse with a farrier” be raised.

During the War between the States, War Department General Orders provided each Cavalry regiment with a veterinary surgeon in the rank of regimental sergeant-major and pay of $75 a month. Further recognition of the need for veterinarians evolved after the Civil War concluded. In 1875 Congress authorized, for the Artillery, medicines and dressings for horses but did not authorize veterinarians, in contrast to their Cavalry counterparts. Congress passed a resolution in 1879 requiring all applicants for veterinary positions with the Cavalry be graduates of a recognized veterinary college.

In the 1890’s veterinarians were being sought to inspect meat, poultry and dairy products destined for the frontier posts. Strong academic background in microbiology, epidemiology, pathology and public health has always made veterinarians ideally suited for a role in ensuring wholesomeness of food.

The Spanish American War was pivotal in the evolutionary pathway leading to establishment of the Veterinary Corps. The Army had inadequately prepared for its role in maintaining the health of both its animals and its Soldiers prior to the war. The infamous “embalmed beef” scandal, incorrectly absorbed blame for the loss of numerous American lives. In actuality there was a lack of adequate quality assurance factors which lead directly to the loss of thousands of American lives as well as having rendered even greater numbers of soldiers completely ineffective. The country began demanding that something be done to preclude such catastrophes in the future.

The American Veterinary Medical Association and numerous other individuals began actively supporting legislation directed toward establishment of an Army Veterinary Corps. Finally, as a result of passage of the National Defense Act of 3 June 1916, veterinary officer commissioning became a reality and the Army Surgeon General began the work of organizing this new Corps within the Regular Army. When war was declared in April 1917 there were 57 veterinarians working for the Army, primarily in the area of equine surgery and medicine. Within 18 months the newly established Corps grew to 2,313 officers.

Veterinary Corps participation in all of our nation’s conflicts since World War I has been an essential element in the maintenance of the health and well being of both animals and Soldiers. The highly technical education obtained by veterinarians has continued to prepare them for their changing mission requirements for over the past ninety years.

The U.S. Army Veterinary Corps continues to significantly impact current operations. Veterinary unit commanders and their personnel are critical in effecting remarkably low food borne illness rates. This is in great measure a result of veterinary inspection of subsistence in the United States as well as the approval of safe food sources around the world. Army veterinarians ensure the health of military working dogs and assist with host-nation related animal emergencies. Veterinary staff advisors also play key roles regarding issues involving chemical and biological defense.

At home, military veterinary supervision of operational ration assembly plants, supply and distribution points, ports of debarkation, and other types of subsistence operations are critical to ensuring safe, wholesome food for our Soldiers, Sailors, Airmen, Marines, and their family members. The large segment of the Veterinary Corps involved in Medical Research and Development missions contribute immeasurably to the overall military effort. Vaccine, antitoxin, and antidote development, directed toward the protection of military personnel, has been and will continue to be, heavily reliant on military veterinary expertise.

Today, the Army Veterinary Corps, composed of 780 veterinarians and warrant officers in both active and the Army Reserves, concludes ninety years of historic achievements about which it can be tremendously proud. Accomplishing its broad functions of food safety and security, animal care, veterinary public health, and research and development, will continue to be essential as long as the need for military forces remain.